High Above the Sky

A short animated film by Kim Noce and Shaun Clark 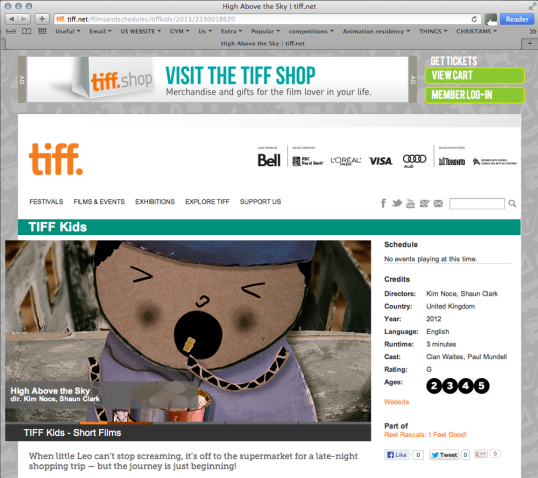 High Above the Sky has been selected in the main competition of TIFF Kids, if you  live around Toronto and have kids  you can have a peak at the film on the schedule here.

Tiff Kids is a section of Tiff , here below just a small blurb about the festivals

The Toronto International Film Festival is the leading public film festival in the world, screening more than 300 films from 60+ countries every September. With reputation for excellence, and a diverse array of films are shown: Hollywood galas, complete with red carpet glamour; the best in international cinema, the latest homegrown comedies… and everything in between.

TIFF Kids offers a diverse slate of films from Canada and around the world — films that take children and parents out of the everyday, and use the power of film to foster thought and encourage discussion about the complex and challenging issues facing young people today, and have lots of fun doing it.

Whenever possible, screenings include an opportunity to engage in discussions with filmmakers and special guests to further explore the film’s ideas, themes, storytelling techniques and much more.

With TIFF Kids, you can be sure the time your family spends in the theatre will be more than just a day at the movies.